This is the equivalent of removing 20,000 cars from the roads and promises to help the country achieve zero emissions by 2050.

Sodium bicarbonate will be food and medical grade, so it can be used as baking soda, for dialysis machines and in pharmaceutical tablets.

Tata Chemicals Europe (TCE) today opened a new plant in Northwich, Cheshire, with the goal of reducing the company’s carbon footprint by more than 10 percent.

Carbon dioxide is captured from the chimneys of a methane-fired power plant, also located on site, before being cleaned, cooled and liquefied.

The plant itself cost £20 million, including a £4 million government grant.

The process for converting purified carbon dioxide to sodium bicarbonate used by TCE is patented in the UK. 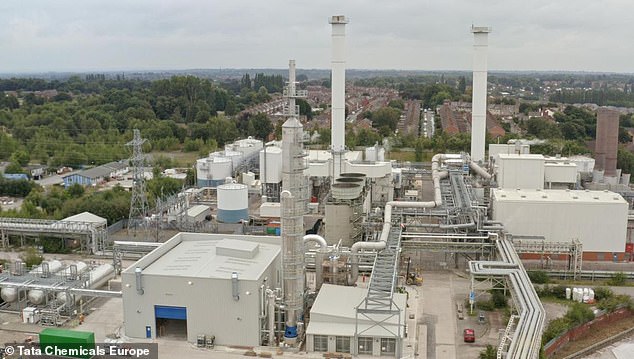 Tata Chemicals Europe (TCE) today opened a new plant in Northwich, Cheshire, with the goal of reducing the company’s carbon footprint by more than 10%. 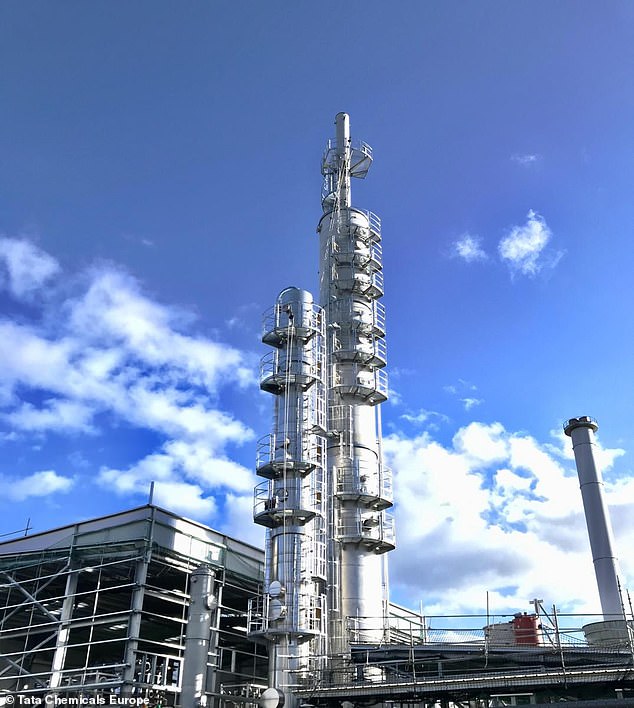 The photo shows columns in which exhaust flue gases are mixed with an amine-based liquid that captures carbon dioxide before being heated by power plant steam. Under the action of heat, purified carbon dioxide is released from the liquid. 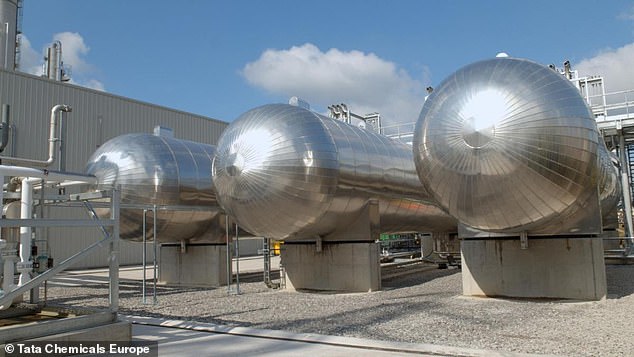 These plants store liquid carbon dioxide, after which it is converted into sodium bicarbonate.

TCE have named their sodium bicarbonate Ecocarb and it will be exported to more than 60 countries worldwide.

Most of the exported sodium bicarbonate will be used for hemodialysis to treat people with kidney disease.

Martin Ashcroft, Managing Director of Tata Chemicals Europe, said: “The completion of the carbon capture and recycling plant allows us to reduce our carbon footprint while securing our supply of high purity carbon dioxide, a critical raw material, helping us grow our pharmaceutical exports across around the world.” 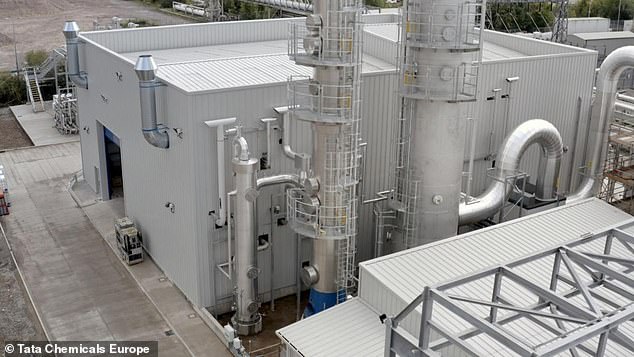 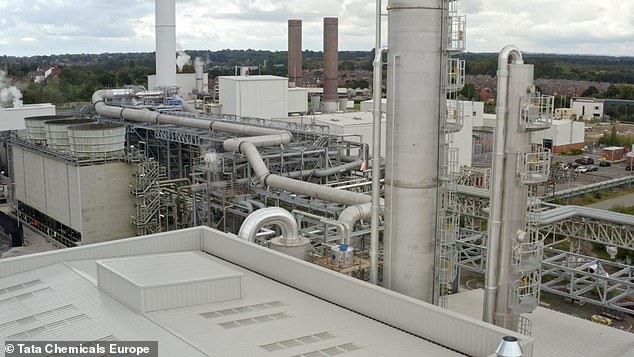 Carbon dioxide is captured from the chimneys of a methane-fired power plant, also located on site, before being cleaned, cooled and liquefied. The process for converting purified carbon dioxide to sodium bicarbonate used by TCE is patented in the UK.

The site has a gas-fired thermal power plant that supplies steam and electricity to operate the company and other businesses in the area.

The plant is also used to produce chemicals, including sodium carbonate, salt, and sodium bicarbonate.

The plant’s exhaust gases are vented at 302 °F (150 °C) and transferred to a carbon capture plant before they are cooled and impurities are removed.

The gases are then mixed with an amine-based liquid that traps carbon dioxide, and then heated using power plant steam.

The heat releases carbon dioxide, which is then purified again by compression and cooling to remove any traces of the amine solution and water.

The carbon dioxide gas then passes through a layer of activated carbon to capture more traces of impurities, after which it condenses to a liquid and is distilled.

The resulting product is over 99.99% pure liquid carbon dioxide, ready to be converted into medical and food grade sodium bicarbonate.

Tata’s process for producing sodium bicarbonate from purified carbon dioxide has been patented in the UK and patent pending in other countries. 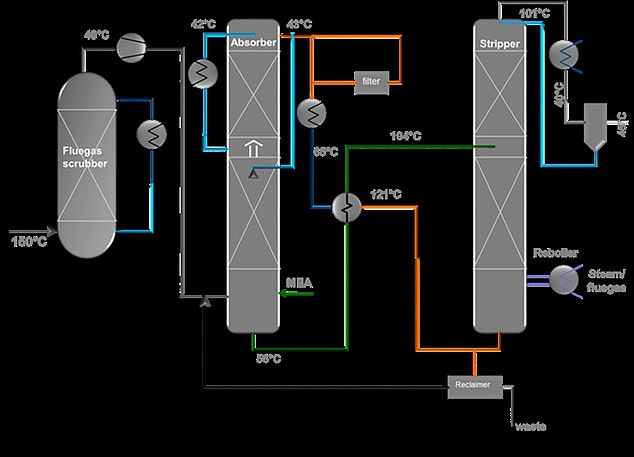 Diagram showing the process of extracting carbon dioxide from off-site power plant flue gases and cleaning it. The process for converting purified carbon dioxide to sodium bicarbonate used by TCE is patented in the UK.

WHAT IS NOT ZERO?

Net zero refers to achieving an overall balance between emissions produced and emissions removed from the atmosphere.

Zero emission organizations must actively reduce their emissions in line with the science-based target of 1.5ᵒC under the Paris Agreement.

There will be some carbon emissions that cannot be eliminated with today’s technology, so having certified greenhouse gas removal systems is also important to achieve net zero.

The UK Government says it is committed to ensuring that the UK’s emissions are offset by removing the same amount of carbon from the atmosphere.

This can be achieved in two main ways: planting more trees and installing “carbon capture” technology at the source of the pollution.

The TCE plant has been testing and ensuring the purity of the produced carbon dioxide for ten months, but is now ready to begin full operation.

Stuart Hazeldine, professor of carbon capture and storage at the University of Edinburgh, said: New scientist what the lack of a permanent storage of carbon dioxide means that some of the waste gas is still vented to the atmosphere.

He said: “This is a reduction in emissions, not a permanent and long-term removal of fossil carbon produced by burning methane gas.”

Speaking at the plant’s opening, Mike Amesbury, MP for Weaver Vale, said: “While there are many competing programs today, sustainability is still critical and we must continue to work towards Net Zero.

“The investment made by Tata Chemicals Europe in this cutting-edge carbon capture plant will not only support the reduction of carbon dioxide emissions, but also pave the way for others to use this technology.”

Kwasi Kwarteng, Secretary of State for Business and Energy, added: “This cutting-edge plant, supported by £4.2m government funding, demonstrates how carbon capture is attracting new private capital to the UK and driving new innovation in cleantech.

“We are determined to make the UK a world leader in carbon sequestration, which will help us reduce emissions and be a key part of the future of British industry.”

WHAT IS Carbon Capture and how does it work?

Carbon Capture and Storage (CCS) captures emissions from the use of fossil fuels in power generation and industrial processes.

The use of CCS with renewable biomass is one of the few carbon reduction technologies that can be used in a “carbon negative” mode, i.e. actually removing carbon dioxide from the atmosphere.

They can be stored underground in depleted oil and gas fields or deep saline aquifers.

Carbon capture technologies allow carbon dioxide to be separated from gases from power generation and industrial processes using one of three methods: pre-burning capture; capture after incineration; and oxygen combustion.

The carbon dioxide can then be stored in carefully selected geological formations, which are usually several miles below the earth’s surface.

Hundreds of people joined the protest against Gazprom in Bulgaria 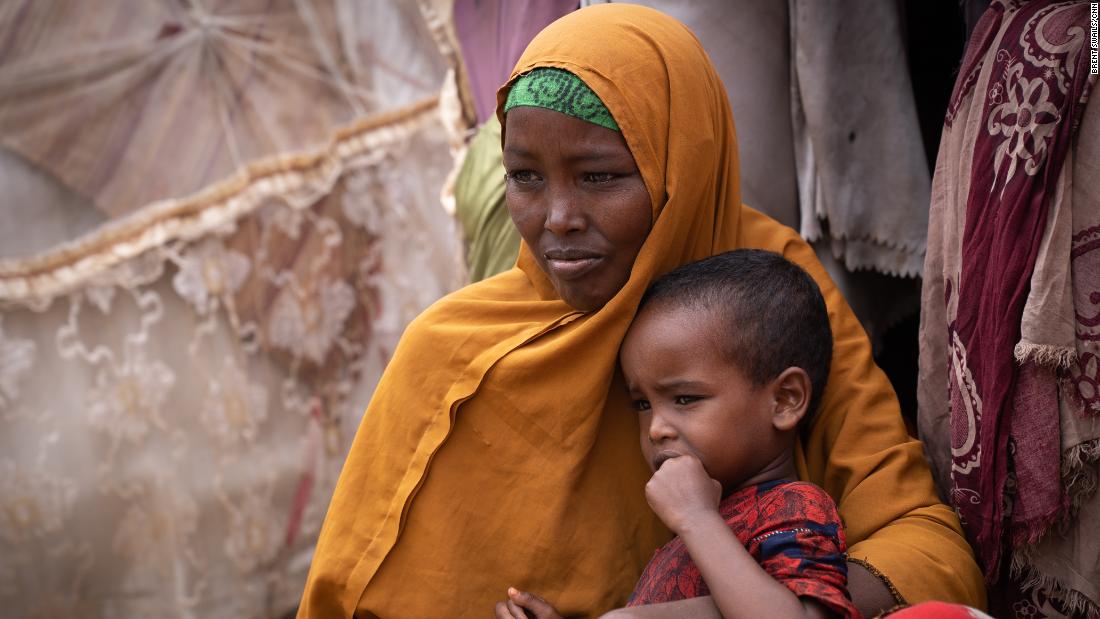