The fossilized brain of a three-eyed shrimp-like creature that swam the oceans 500 million years ago could prompt a rethinking of the evolution of insects and spiders.

The creature, named Stanleycaris hirpex, is described as “the essence of nightmares”.

He had two eyes “on the stems”, and the third was in the middle of the head, a frightening-looking round mouth, studded with teeth, and front claws with an impressive set of spikes.

Stanleycaris lived during the Cambrian Explosion, a period of rapid evolution when most of the major animal groups appeared in the fossil record.

It belongs to an ancient, extinct branch of the arthropod evolutionary tree called Radiodonta, distantly related to modern insects and spiders.

Despite the bizarre appearance of Stanleycaris, what scientists were most excited about was the contents of its head.

In studying more than 250 506-million-year-old Stanleycaris fossils, they found that the brain and central nervous system were still preserved in 84 fossils.

They show that the brain of Stanleycaris consisted of two segments, rather than three, as in modern insects, which sheds new light on the evolution of the brain, vision and head structure of arthropods. 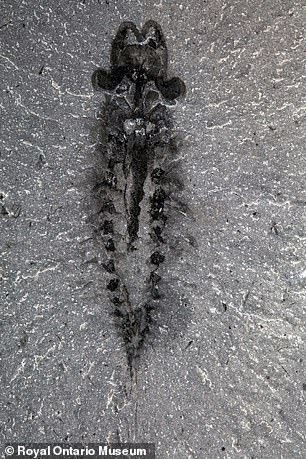 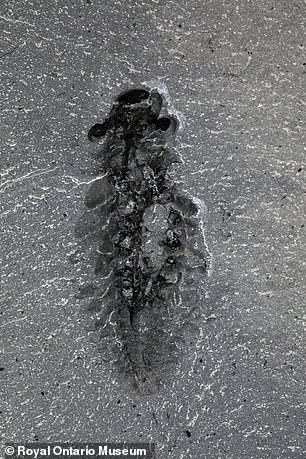 A fossil specimen of Stanleycaris hirpex collected from the Burgess Shale, a fossil deposit exposed in the Canadian Rockies of British Columbia. The dark material inside the head is the remnants of neural tissue.

Stanleycaris had two “stemmed” eyes and a third in the middle of its head, an intimidating round mouth studded with teeth, and front claws with an impressive array of spikes.

Environment: bottom of the seabed

Fossils of Stanleycaris were collected from the Burgess Shale – a fossil-bearing deposit exposed in the Canadian Rockies of British Columbia – in the 1980s and 90s.

Finding fossilized soft tissue is rare. Most fossils are bones or hard body parts such as teeth or exoskeletons, while the brain and nerves are made up of fat-like substances that do not normally survive.

“While fossilized brains from the Cambrian period are not new, this discovery stands out for its surprising quality of preservation and large number of specimens,” said Joseph Moisyuk, lead author of the study and Ph.D. at the University of Toronto. Royal Ontario Museum.

“We can even make out fine details such as imaging centers serving large eyes and traces of nerves entering the appendages.

“The details are so clear, it’s like we’re looking at an animal that died yesterday.”

They show that the brain of Stanleycaris consisted of two segments, the protocerebrum and the deutocerebrum, associated respectively with the eyes and frontal claws. These brain segments control vision and antenna signals in arthropods today.

In modern arthropods, such as grasshoppers and other insects, the brain consists of three segments – protocerebrum, deutocerebrum and tritocerebrum.

The tritocerebrum connects to the upper lip, the movable upper lip, and integrates sensory information from the other two lobes of the brain.

Although the difference in one segment may not seem fundamental, but, according to the researchers, it actually has a radical scientific significance.

Since repeated copies of the organs of many arthropods can be found in their segmented bodies, figuring out how the segments line up between different species is key to understanding how these structures evolved.

“These fossils are similar to the Rosetta Stone, helping to link features of radiodonts and other early fossil arthropods to their counterparts in surviving groups,” Moysiuk said. 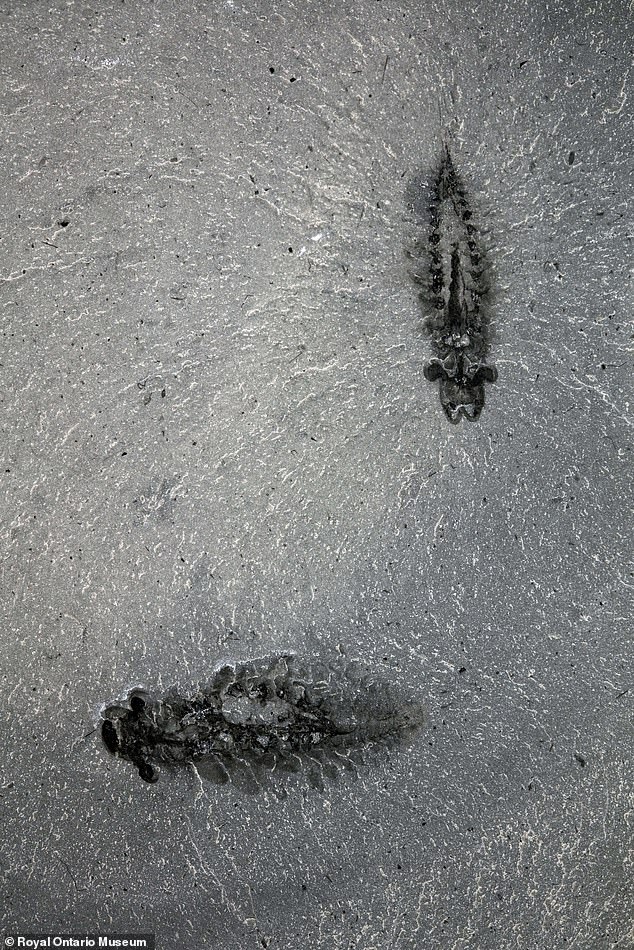 They show that the brain of Stanleycaris consisted of two segments, the protocerebrum and the deutocerebrum, associated respectively with the eyes and frontal claws. Pictured: a pair of fossil specimens of Stanleycaris hirpex. 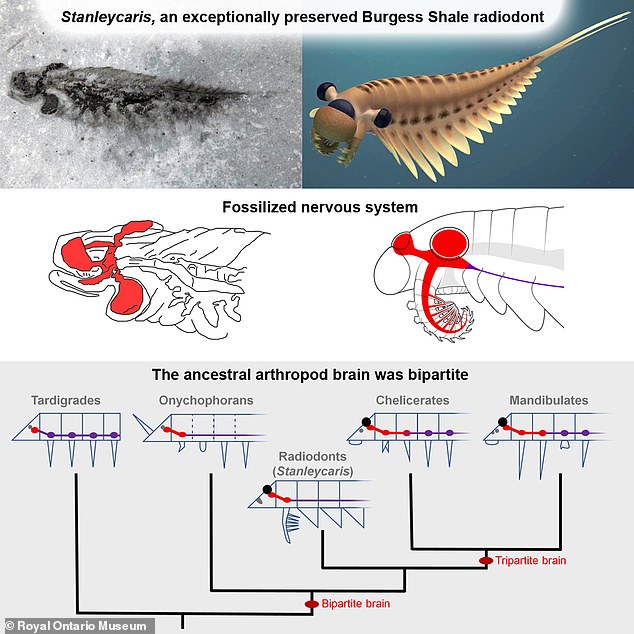 Abstract of the paper showing the interpretation of the nervous system from the Stanleycaris fossils and the implications for understanding the evolution of the arthropod brain. The brain is represented in red, and the nerve cords in purple. 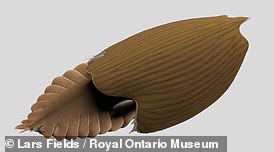 The remains of a new species of primitive arthropod that lived 500 million years ago were discovered in the Canadian Rockies, and they dwarfed their counterparts.

Floating in the seas of the Earth’s Cambrian period, Titanokorys gainesi reached 1.6 feet in length at a time when most species were the size of a little finger.

The creature had multifaceted eyes, a tooth-studded mouth resembling a slice of pineapple, a pair of spiky claws, and a body with a series of swimming wings.

“We conclude that the two-segmented head and brain are deeply rooted in the arthropod lineage and that their evolution likely preceded the three-segmented brain that is characteristic of all living members of this diverse animal phylum.”

Stanleycaris belonged to radiodonts, apex predators that were among the largest animals of the Cambrian period.

This includes the famous “weird marvel” Anomalocaris, which reached at least 3 feet 3 inches (1 m) in length.

At no more than 8 inches (20 cm) long, Stanleycaris was small for its group, but at a time when most animals were no larger than a human finger, it was an impressive predator.

Radiodont means “radiating teeth”. The unusual animals were named for their toothy, round jaws and adapted to the dim light of deep water.

Stanleycaris’ sophisticated sensory and nervous systems would allow it to efficiently detect small prey in the dark, the researchers said.

In addition to a pair of stalked eyes, Stanleycaris had a large central eye at the front of its head, a feature never seen before in radiodonts.

“Having a huge third eye was unexpected,” the doctor said. Jean-Bernard Caron, Richard Ivey, Curator of Invertebrate Paleontology at ROM and Scientific Director of Moisyuk.

“This highlights that these animals looked even more bizarre than we thought, but also shows us that the earliest arthropods already developed many complex visual systems, like many of their modern relatives.

“Because most radiodonts are known only from scattered fragments, this discovery is a decisive step forward in understanding what they looked like and how they lived.”

The study is published in the journal Current Biology. 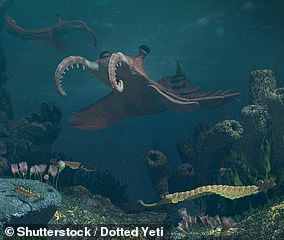 The Burgess Shale is a mineral deposit that comes to the surface in the Canadian Rockies.

Rock – black shale – was deposited in the ancient sea about 500 million years ago, during the Cambrian period of the Earth’s history.

It is known for its exceptional fossil preservation and is one of the oldest known deposits containing evidence of soft-bodied creatures.

Many strange animal species have been found in the slates, including the large and streamlined predator Anomalocaris, the segmented Opabinia, and the alien spiny Hallucigenia.

The Burgess Shale is exposed at a number of locations near the town of Field in Yoho National Park and Kicking Horse Pass, and in Kootenay National Park to the south.

The deposits were first discovered in August 1909 by paleontologist Charles Wolcott. In 1980 it was listed as a UNESCO World Heritage Site. 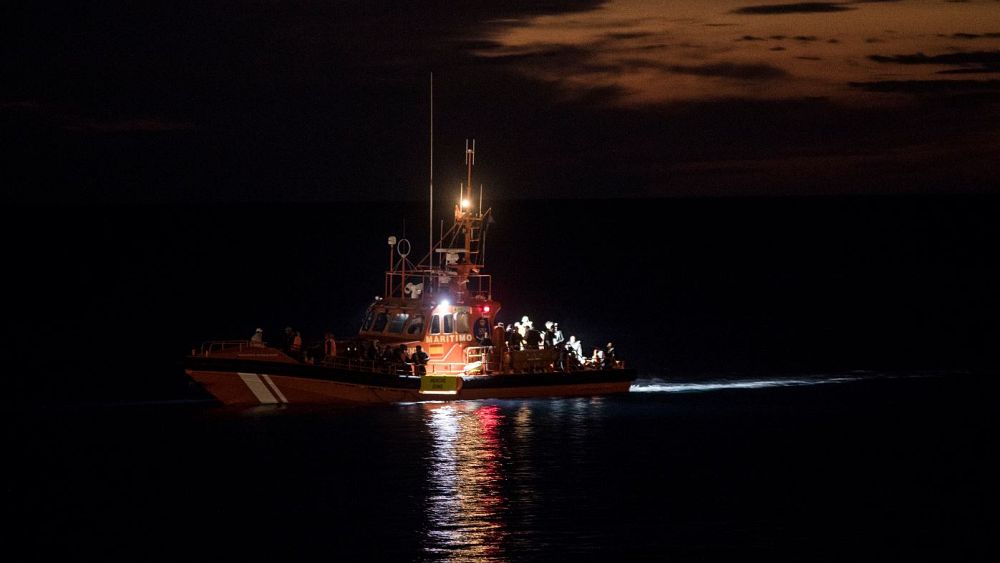 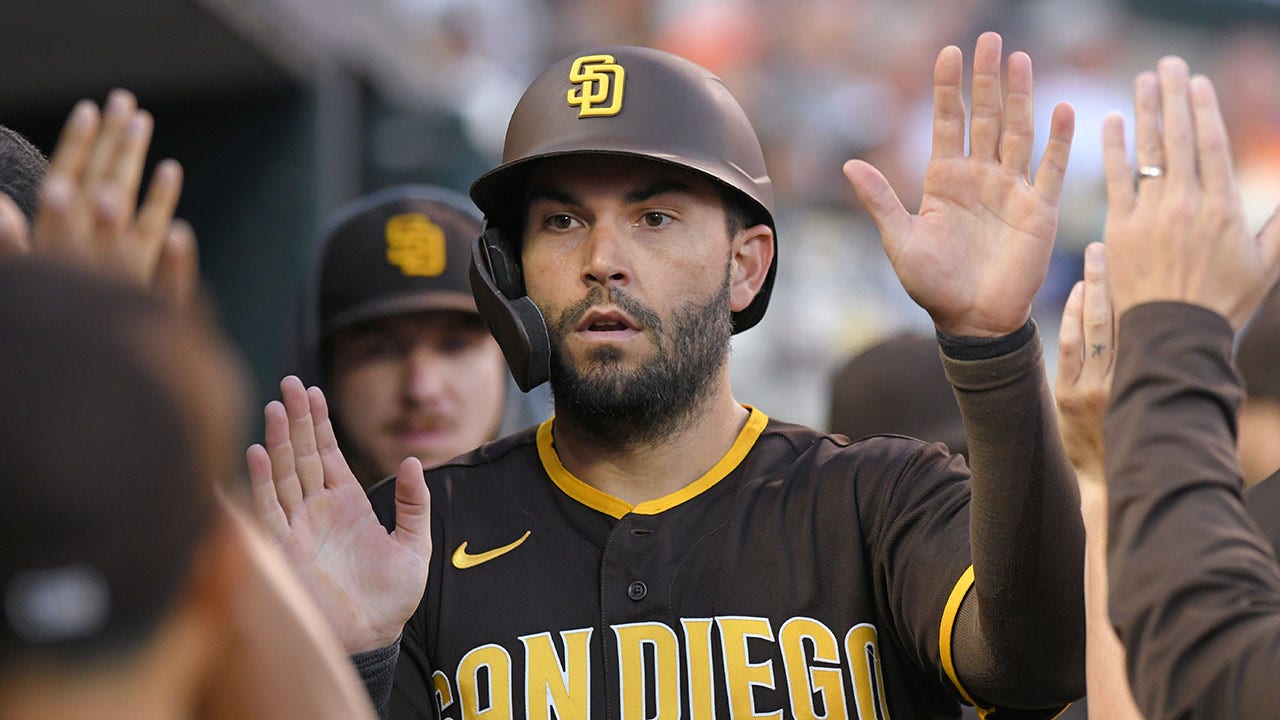