Shocking satellite images have shown the extent of the damage caused by wildfires as a heat wave swept through Western Europe this week.

The images were taken by the European Space Agency’s Copernicus Sentinel-3, a satellite that orbits 814.5 km above the Earth’s surface to measure the state of our planet’s oceans, land, ice and atmosphere.

Photographs taken in the southern part of the Gironde region in France On July 12 and July 17, smoke and patches of scorched earth are visible, highlighting the extent of the damage caused by wildfires due to extreme heat.

The ESA has also released a heat map showing ground surface temperatures in the south of France. Spain and northern Africa on the morning of 17 July.

“In some places, the surface of the earth has reached a whopping 55°C. [131°F]”, explains the European Space Agency.

“Given that Copernicus Sentinel-3 received this data in the morning, the temperature should have risen during the day.” 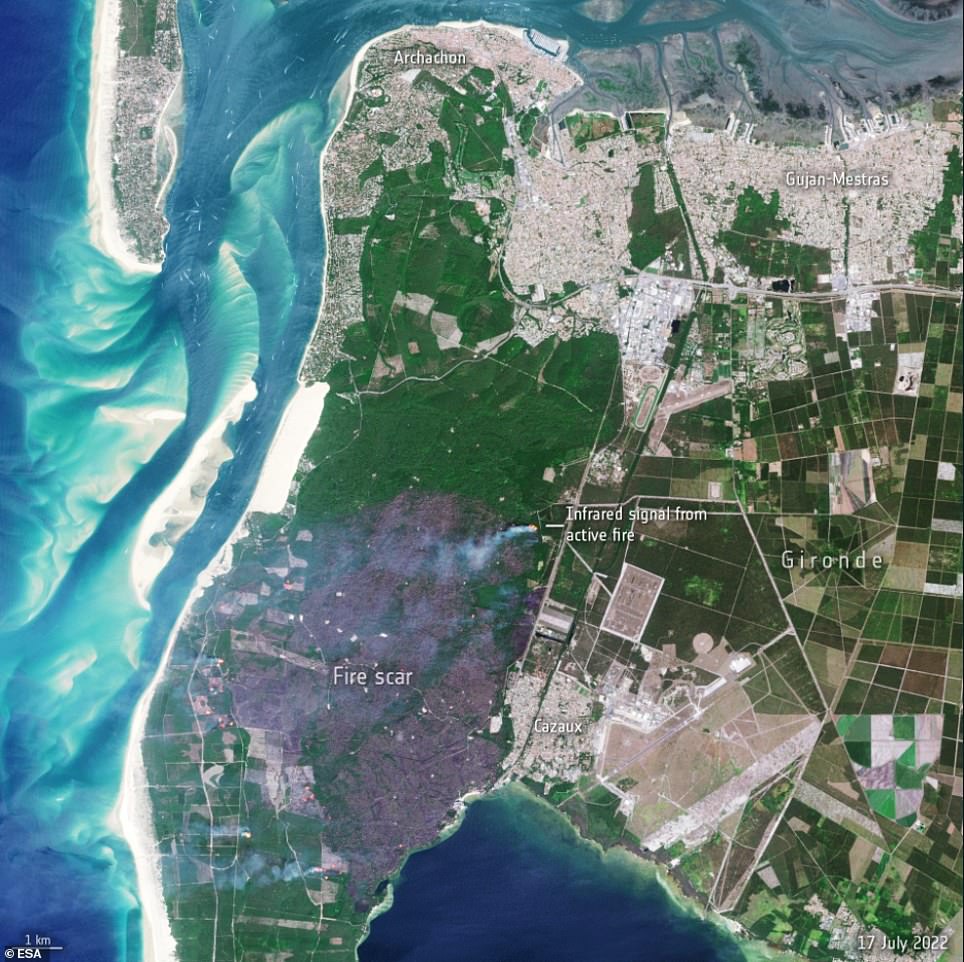 Other side-by-side images taken on July 12 and 17 show burn scars and active hotspots near La Teste-de-Buch, where forest fires reached the beach. 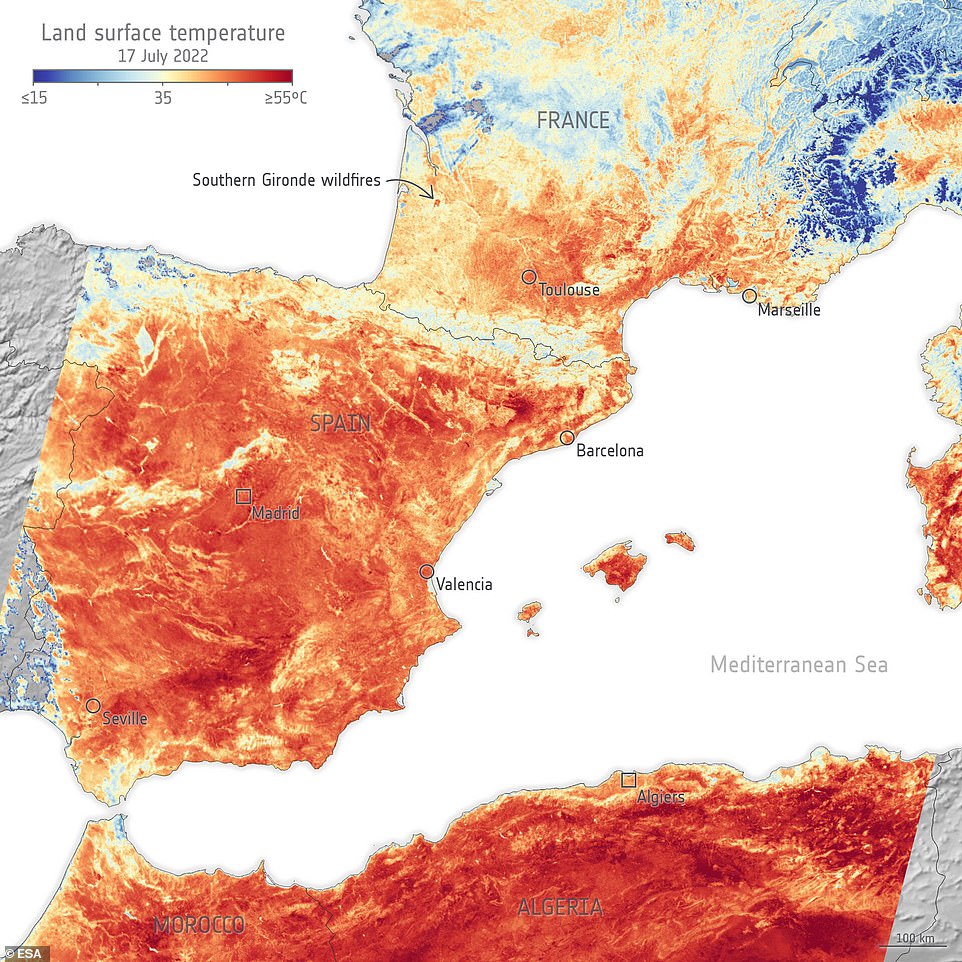 Why are forest fires worse in the heat?

Heat waves dry up the fuel needed to start and spread wildfires.

Dry conditions mean that forests, shrubs and other plants are “dry as tinder”—extremely dry and flammable, like the tinder needed to start a fire.

In more rural areas, overgrown forests and dense vegetation can start a fire that gets out of control.

The weather can also exacerbate a fire in other ways – for example, wind can create “fire whirlwinds,” fast and dangerous wildfires like tornadoes that spread easily.

Air temperature is a measure used for our daily weather forecast and a measure of how hot the air is above ground.

“These measurements are also especially important for farmers assessing how much water their crops need and, for example, for city planners looking to improve heat mitigation strategies.”

One set of satellite imagery taken on July 12 and 17 shows the scars left by wildfires around the commune of Guyot and near the town of Caseau in southwestern France.

“On July 12, 2022, two large forest fires broke out in the southwest of France,” the ESA explained.

“The wildfires have hit local communities hard, with over 16,000 people evacuated in total and roads closed.

“Despite the scale of the fires, there were no casualties.” 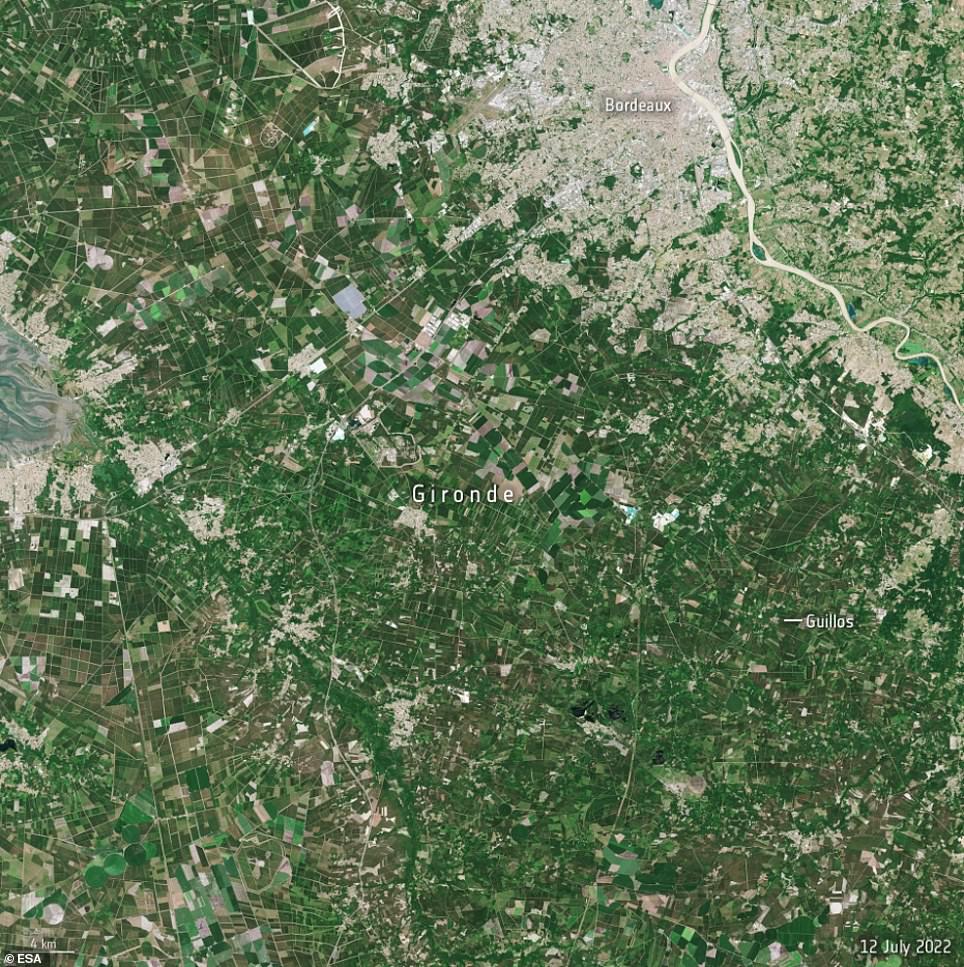 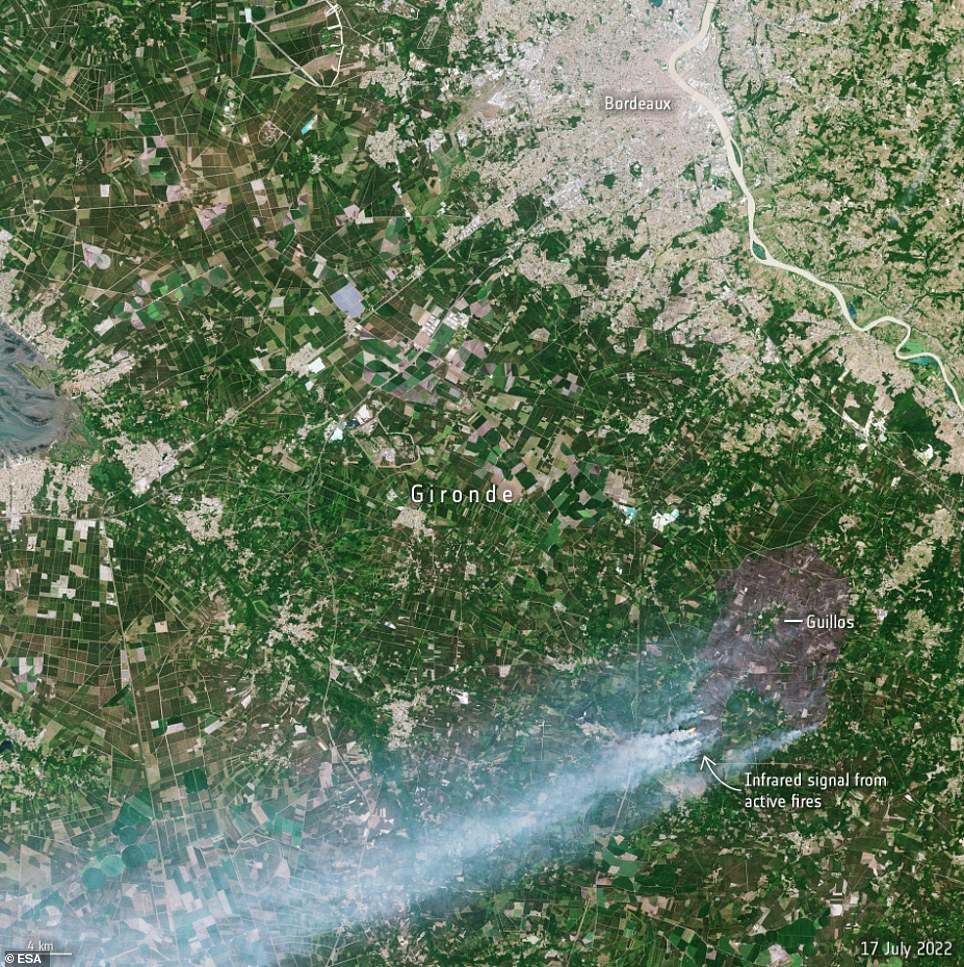 A series of satellite images taken on July 12 and 17 show the scars left by the forest fires around the commune of Guillos and near the town of Caso.

The Copernicus Sentinel-2 satellite is equipped with an innovative high resolution multispectral imager with a wide swath and 13 spectral bands.

According to the ESA, it gives a new perspective on our land and vegetation through the shortwave infrared channel used to generate heat from a forest fire.

Other side-by-side images taken on July 12 and 17 show burn scars and active hotspots near La Teste-de-Buch in southwestern France, where wildfires have reached the beach.

“The Copernicus Emergency Management Service has been called in to respond to many of the fires currently plaguing Europe, including those affecting the Gironde,” ESA explained.

“The service uses multiple satellite observations to provide a map on request to assist civil protection authorities and the international humanitarian community in the face of major emergencies.” 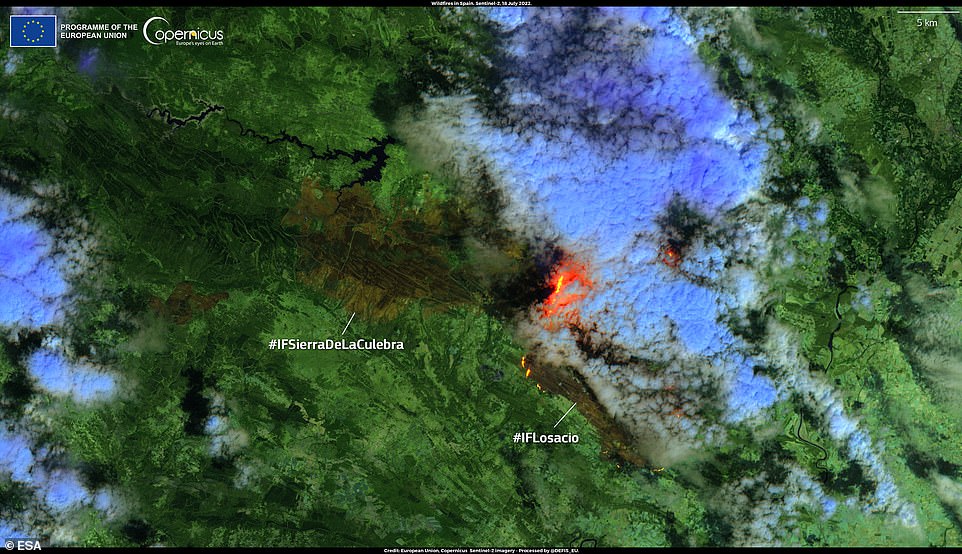 An image taken by Copernicus Sentinel-2 on July 18 shows a cloud of smoke and active flames from a forest fire in Losacio, as well as a scar from a fire in the Sierra de la Culebra.

In addition to France, Spain and the UK, there have also been massive wildfires amid extreme heat.

On July 17, a fire broke out near Losasio in the province of Zamora in the Spanish autonomous region of Castile and León.

An image taken by Copernicus Sentinel-2 on July 18 shows a cloud of smoke and active flames from a forest fire in Losacio, as well as a trail from a fire in the Sierra de la Culebra.

Heat warnings are still in effect in many parts of Europe, and drought warnings are also in place in half of the countries in the European Union.

“As the impacts of climate change intensify, there are fears that such extreme weather events will also intensify,” the ESA concluded.

“Satellites orbiting the planet play an important role in delivering data to understand and monitor how our world is changing – data that is key to mitigation strategies and policy decisions.”

WHAT IS THE EUROPEAN SPACE AGENCY SENTINEL 3 AND WHAT DOES IT DO?

Sentinel 3 is primarily an ocean exploration mission developed by the European Space Agency (ESA) as part of its Copernicus program. However, it can also provide atmospheric and land mass data.

Sentinel 3A was launched on February 16, 2016, and its twin Sentinel 3B arrived in orbit on April 25, the seventh Esa Sentinel Earth observation satellite.

The two satellites orbit 506 miles (815 km) above the Earth on opposite sides of the planet. 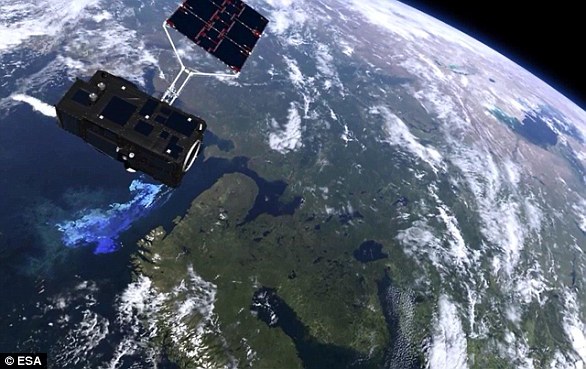 Sentinel 3 (pictured) is primarily an ocean exploration mission developed by the European Space Agency as part of its Copernicus program. However, it can also provide atmospheric and land mass data.

Their data can also help shipping companies map out more efficient routes and can be used to monitor wildfires, water pollution and oil spills.

Project Copernicus is described by the ESA as the most ambitious Earth observation program to date. The European Union and ESA have pledged over eight billion euros (£7.12bn/US$9.8bn) to it by 2020.

The launch of the Copernicus project became especially urgent after Europe lost contact with its Envisat Earth observation satellite in 2012 after 10 years. 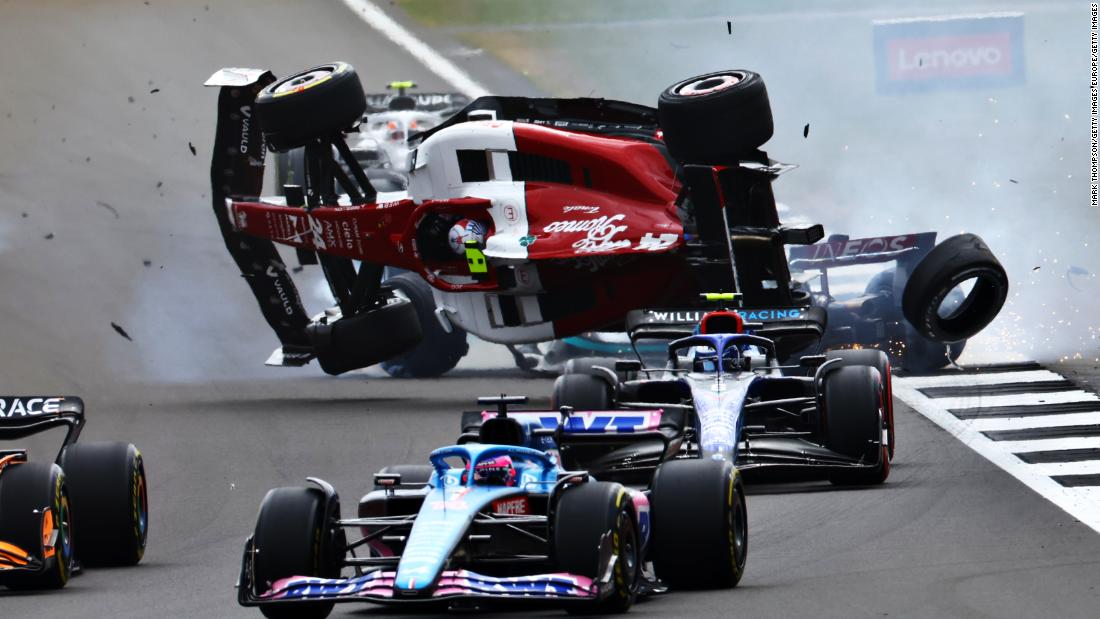 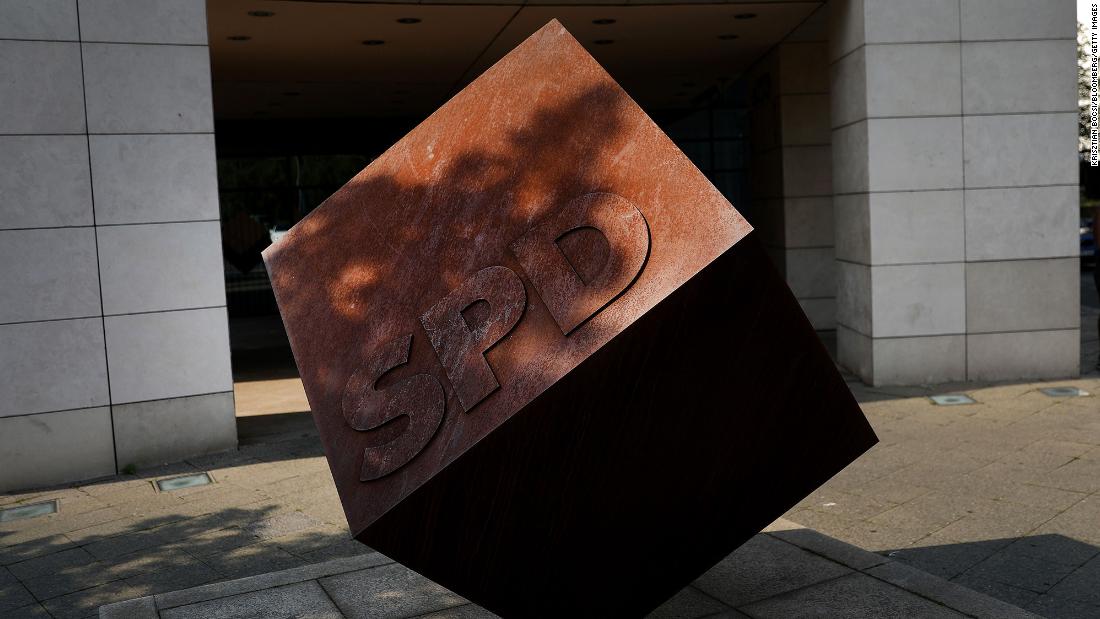 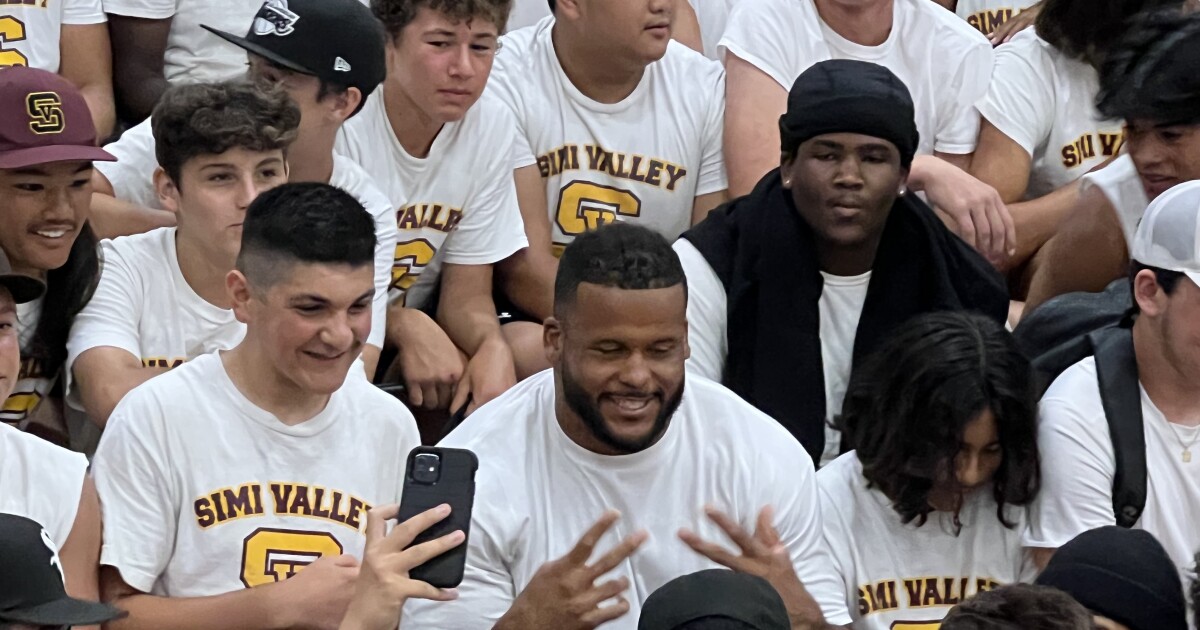