Now experts have said that man-made changing of the climate made a record heat wave at least 10 times more likely, but possibly more as it is a “conservative estimate”.

Temperature extremes were higher than climate models predicted, suggesting that the effects of climate change on heatwaves could be even worse than previously thought. 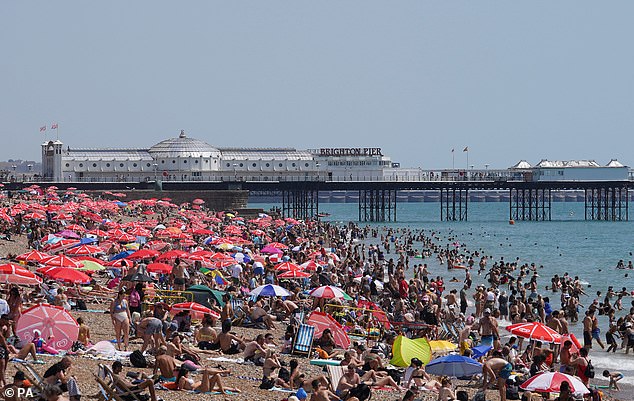 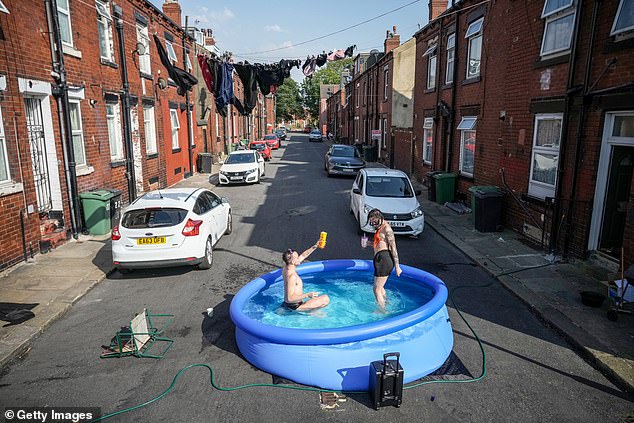 Residents swim in a paddling pool to cool off outside their home on July 19, 2022 in Leeds. Temperatures topped 104°F (40°C) in parts of England after the Met Office issued its first red extreme heat warning. Human-induced climate change has made a record heat wave “at least 10 times more likely”, researchers say.

On July 15, the Met Office issued the first ever red alert for extreme heat between July 18 and 19 in parts of England.

In the days that followed, many weather stations across the country recorded the highest temperatures on record, breaking previous records by 3-4°C (5.4-7.2°F) in many cases.

There could be hundreds of heat-related deaths in England and Wales, researchers say, though the exact number won’t be known for weeks.

Children, the elderly and people with chronic illnesses are especially vulnerable to extreme heat.

City dwellers are also at higher risk of dying from heat, which is more effectively contained in built-up areas.

The analysis was carried out by an international team of 21 researchers as part of the World Weather Attribution group, which included experts from Imperial College London, Oxford and Edinburgh Universities.

“Even with a conservative estimate, we see a big role for climate change in heat waves in the UK,” said Mariam Zaharia of the Imperial Institute for Climate Change in Grantham.

“In our current climate, which has been altered by greenhouse gas emissions, many people experience events in their lives that would otherwise be nearly impossible.”

They focused on a region roughly corresponding to the red warning zone, but also including parts of east Wales.

They used computer simulations to compare the likelihood of temperatures observed during the 2022 heat wave in the current climate and in a world without the 1.2 °C (2.1 °F) global warming observed since the 19th century.

Modeling suggests that climate change, driven by an increase in heat-trapping greenhouse gases emitted into the atmosphere by human activity, has made a heat wave 10 times more likely, and possibly even more likely.

While models estimate greenhouse gas emissions increased temperatures during this heat wave by 2°C (3.6°F), anecdotal historical weather data indicate that the heat wave would have been 4°C (7.2°F) F) colder in pre-industrial times, when the world had yet to be significantly warmed up by human activity.

This shows that temperature extremes are higher than even climate models predict because extreme temperatures in Western Europe are rising faster than expected.

Meanwhile, the likelihood that a world that is only 1.2°C (2.1°F) colder will experience a heatwave like last week is “extremely low” and “statistically impossible” in some places. they discovered.

The researchers focused on a region (shown here in the box) roughly corresponding to the red alert area, but also including parts of east Wales. a) maximum daily temperatures for July 19 are shown; b) shows the two-day average for July 18-19 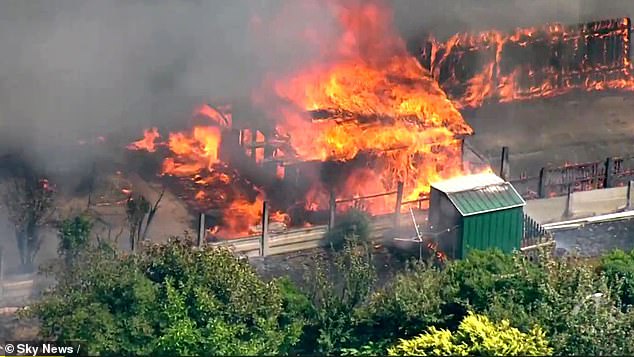 Severe temperatures have sparked wildfires and thunderstorms, damaged infrastructure and likely killed more than 800 people. Pictured is a fire in residential areas of Wennington, Greater London on July 19, 2022.

The researchers note that heatwaves in midsummer pose a “significant risk to human health” and are “potentially deadly.”

This risk is exacerbated by climate change, as well as other factors such as population aging, urbanization, changing social structures and readiness levels.

Professor Tim Palmer of the University of Oxford, who was not involved in the study, said there was “very little doubt” that human-induced climate change is making heatwaves more likely in the UK.

“You have to be an ostrich with your head in the sand to think otherwise,” he said. 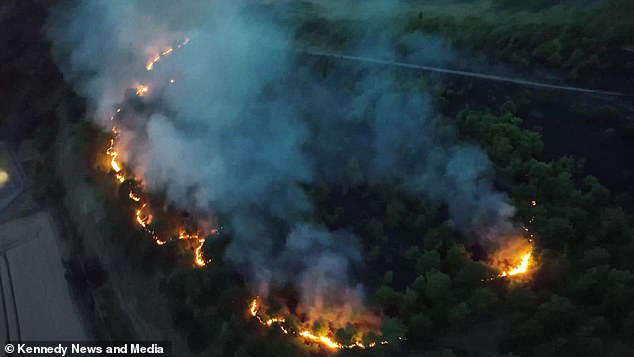 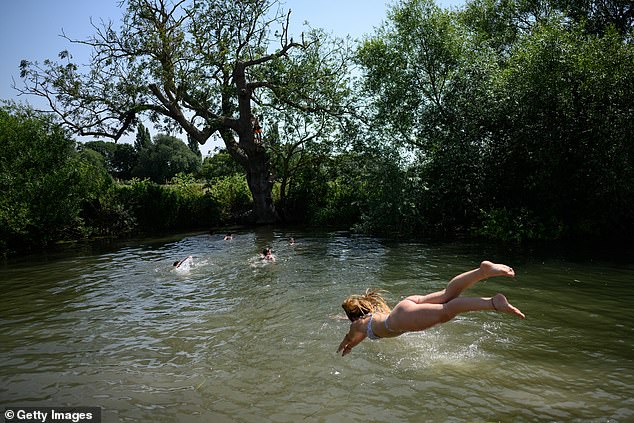 A young woman dives into the River Cam as temperatures reach record highs on July 19, 2022 in Cambridge, England.

Unfortunately there is very little experience in the UK with extreme heat and many homes in the UK have a limited ability to withstand the heat.

Last year, the UK Climate Change Committee warned that more than 570,000 houses could not withstand high temperatures, making many of them uninhabitable.

Zacharias said the longer it takes for the UK to reach zero emissions, “the bigger the heatwaves will be.”

Net zero emissions means any UK carbon emissions will be offset by offset schemes for an equivalent amount of greenhouse gases from the atmosphere.

Reducing greenhouse gas emissions, including CO2 and methane, is seen as key to meeting the goals of the Paris Agreement to limit climate change.

Achieving the Paris targets is seen as the key to averting a planetary catastrophe leading to devastation in the form of frequent climate disasters and millions of deaths.

Dr Radhika Khosla, professor at the Oxford Smith School of Entrepreneurship and the Environment, said: “The heat levels that the UK is currently experiencing are dangerous.

“This puts a strain on our infrastructure, economy, food and education systems, and our bodies. As the study shows, many houses in the UK are becoming uninhabitable due to extreme heat.

“Adapting to rising temperatures, increasing heat tolerance through sustainable approaches, and protecting people is an urgent priority as unprecedented temperatures become the norm.”

He hopes to keep the increase in global mean temperature below 2°C (3.6°F) “and continue efforts to limit temperature increases to 1.5°C (2.7°F)”.

It looks like the more ambitious goal of limiting global warming to 1.5°C (2.7°F) may be more important than ever, according to a previous study that claims 25 percent of the world could face a significant increase in dry conditions. .

The Paris Agreement on Climate Change has four main objectives for reducing emissions: 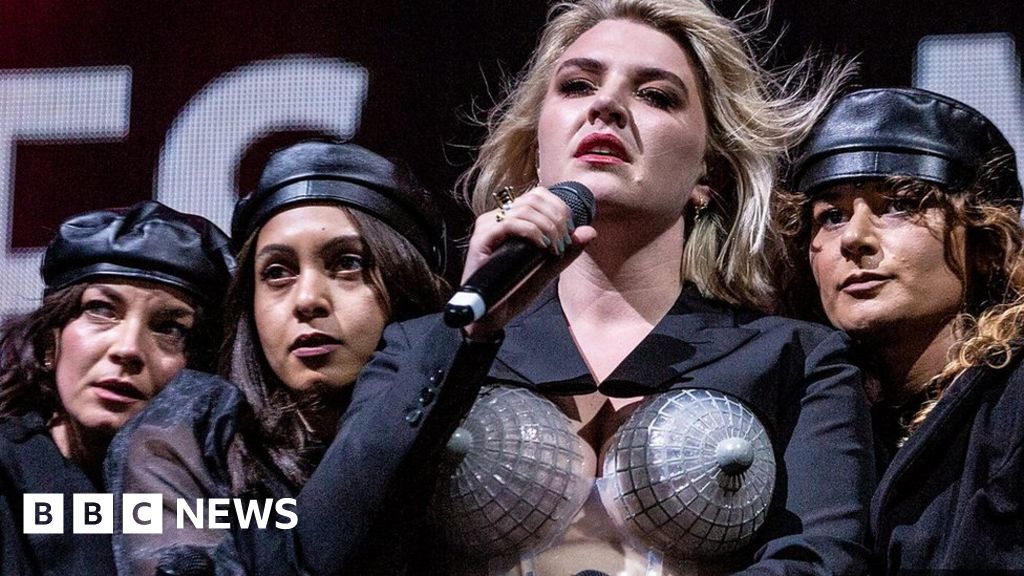 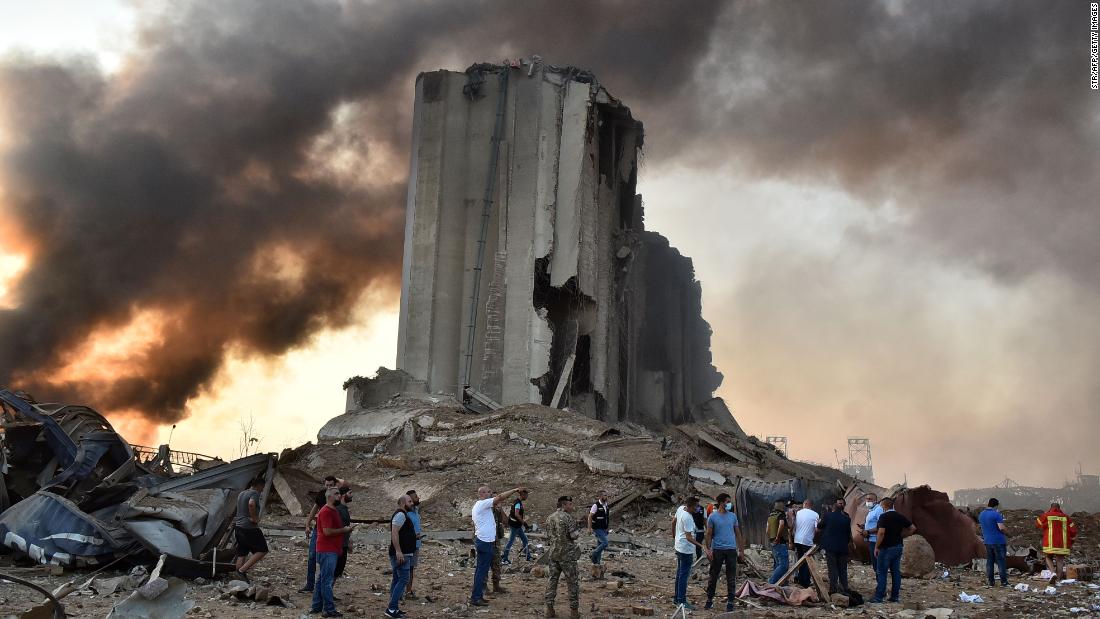 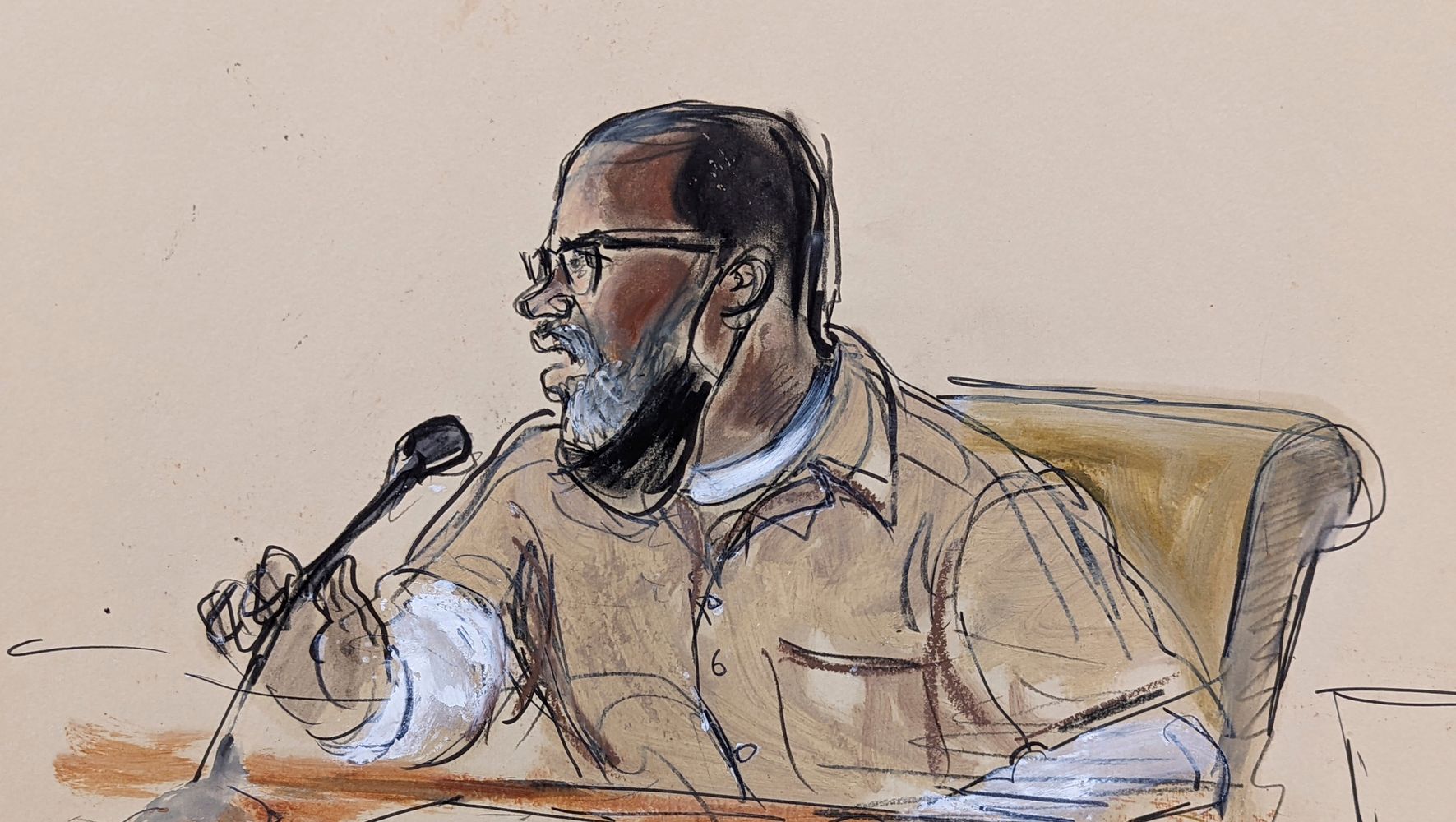